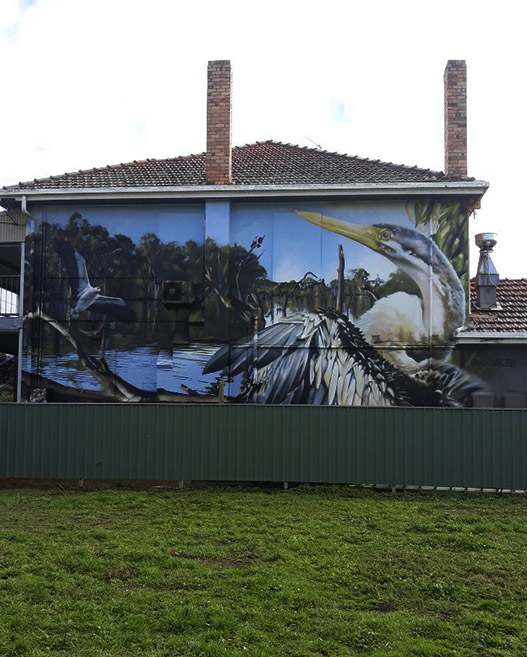 In early May, I helped out at the Leitchville footy club’s celebration night, which was fantastic. After the function, I went back to my digs at Bones McGillivray’s Gunbower Hotel, which was also fantastic.

Bones is from a great old footy family. A few McGillivray footballers have played at League level, including Malcolm at Essendon in 1950 (love the story behind his one game) and Andy at Geelong in 1977.

Bones himself was a very handy footballer with Gunbower. Now he’s busy with his innovations in food and hospitality at the pub. And his latest innovation is sure to turn heads.

In keeping with the current trend for street art where few streets are to be found, Bones commissioned a Melbourne street artist to paint a mural on the side of his pub, which is on the Murray Valley Highway behind Echuca and Kerang.

The artist goes by the moniker of Dvate (as in d-v-ate), which is all very vogue and modern, and not generally associated with northern Victorian hotels, but that’s the sort of bloke Bones is.

Dvate’s subject is one of the many glorious bird species to be found in the wetlands behind the town, on the flood plains of the Murray River. Check out the mural. Check out the pub. Bones is a publican who knows his way around the kitchen as well as the bar.

This weekend I am heading back up that way to host a reunion night at the Murrabit footy club. I’m taking an old mate who grew up in Murrabit before moving to Melbourne at 15 and becoming a legend down here, at least a legend in our small circles in Essendon.

The mate is Andy Muir. We’re both looking forward to the trip. Out host for the weekend is the Murrabit president Cam Coulter. Say hello if you’re there.

I’ve been an infrequent correspondent in recent weeks because I’m busy finishing off my book The Totem Poles of Ouyen United. But I’ve been doing plenty! Click on the links for the three shows over the past week on RSN.

My First Game, with Kevin Hillier: Kevin “Happy” Hughes, one game with North Melbourne in 1988

Thanks to my PD Footy business partners over the past three years: